Redwood City, CA, USA, February 13, 2018 – Avast, the global leader in digital security, released its Q3 2017 Android App Performance and Trend Report, providing insights from three million Avast Android device users. The report shows which apps consume system resources, either while actively being used or while they run silently in the background. Knowing this, users can make better decisions when it comes to the apps they download and can optimize settings to avoid drained batteries, maximize storage space, and prevent excessive data usage. 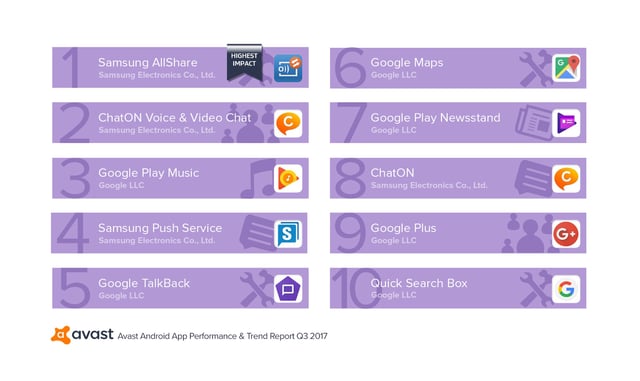 Top 10 apps that drain Android phones’ while running in the background.

Report Results
The report reveals that, among the apps that run at startup and remain active in the background, Samsung’s and Google’s apps dominate the top 10 list of apps that drain battery life, mobile data, and storage, combined. Samsung’s AllShare app is the number one offender. 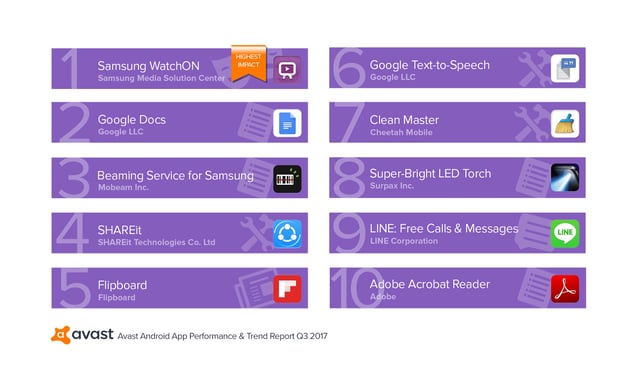 Top 10 apps that take a toll on smartphone performance as they’re actively being used.

Further results from the report show that nine out of ten Android users use a Samsung device and that half of the phones in the list of top ten popular devices are more than two years old.

“Our latest report outlines which apps Android users should be aware of if they frequently run out of storage, battery life, or mobile data, and provides tips on how to optimize app settings to avoid these issues,” said Gagan Singh, Senior Vice President and General Manager of Avast Mobile. “Concerning, however, is how many older Samsung devices are still being used. Many of these users may not be aware that Samsung does not regularly provide security updates for older model smartphones, putting users’ security at risk.”

Avast’s Cleanup app for Android allows users to easily delete unwanted files for more storage and optimized performance. Avast Cleanup can be downloaded for free from the Google Play Store.

The full Avast Android App Performance and Trend Report can be downloaded for free.

Methodology: The aggregated and anonymized data analyzed for the Q3 2017 Avast Android App Performance and Trend Report was collected between July to September 2017 from more than three million Avast Android mobile app users. The apps analyzed for the report only include Google Play apps where Avast observed a minimum sample size of 50,000 usage incidences.